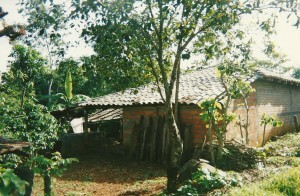 Having spent 10 months as a Peace Corps volunteer in El Salvador in 2003 (before I early-terminated after losing 30 pounds and being constantly sick), I was disappointed to see that Peace Corps is shutting down its operations in Honduras and not sending more volunteers into Guatemala and El Salvador.

The reported reason is crime: the Northern Triangle of Central America (the three aforementioned countries) has one of the world’s highest crime rates, only rising as drug and gang wars heat up. While I have not been to Central America since 2005 and have lost touch with my village, Peace Corps’s decision mystifies me.

In 2003, crime was certainly an issue in El Salvador. From what I remember of my group’s briefing by Embassy security officers, the murder rate for the country as a whole was comparable with that of the worst of U.S. cities. This briefing included precautions we should all take.

Yet, while I was there–frequently riding buses the 60 miles between my site and the nurse’s office in San Salvador–I didn’t have any issues. Granted, I’m a 5’11”, not small man, but nonetheless, I felt protected by people in my village–even the guys local chisme (gossip) said were gang members. By contrast, two years later I had a bicycle and my backpack stolen within a six-week period in Dupont Circle, one of the better-off neighborhoods of Washington.

I don’t doubt that the security situation in El Salvador has deteriorated since I was there, and I know that Peace Corps has volunteers’ best interests at heart. Nonetheless, I’m saddened and mystified by this decision. Has Honduras gotten so bad–with violence aimed specifically at Peace Corps volunteers–that there was no other choice? Has the country become the equivalent of a combat zone?

The part that mystifies me most, though, is the decision not to send new volunteers into Guatemala and El Salvador. This seems a half-baked compromise. If the countries are that dangerous, then Peace Corps should simply withdraw. If the countries aren’t dangerous enough to necessitate withdrawal, Peace Corps should send the next batch of volunteers there–such as the January group, of whose predecessor I was a member nine years ago.

Is this a precursor to an eventual withdrawal from Guatemala and El Salvador? Is Peace Corps hoping to have fewer volunteers to evacuate if that decision is made?

Peace Corps previously withdrew from El Salvador in 1979, as the conflict between guerrillas and a U.S.-backed government got worse. It would be a shame for Peace Corps to be forced to withdraw again, as violence resulting from drug demand in the United States creates a worsening security situation.

El Salvador needs development assistance, and Peace Corps gets some of the best bang for the buck–its annual budget is a fraction of the military aid sent there every year during the civil war. I hope that any decision on withdrawal is only taken in an absence of any alternative. Not allowing new volunteers into the country does not seem like a viable alternative.