This week I commented on the following classmates’ blogs:

Fun with fonts and styles

As I’ve read the book and watched the video for this week’s assignment (scroll to February 13), I’ve been dividing my attention: I’ve succumbed to the temptation of continually modifying my portfolio site, based on the inspiration and new skills that the video and book have afforded me.

This shows one of the many ways that doing history on the web is different, and raises a question for students in digital history classes. For last week’s assignment I sent Dr. Petrik a link to my portfolio homepage. If this were a paper, I may have done as I have in other classes: when I came up with another idea, thinking, “I should have done that! Too bad it’s too late,” during the following week. But unlike with a paper, I’m actually doing something: modifying the CSS for the overall site–at this point, I’m using the same CSS for the start page and for each of the assignment pages. But I’m not sure if I should be doing that, or if I should just leave it as-was. For example, last semester, after our proof-of-concept assignment was due, I had ideas for things to add to it. But I held off until I was sure that Dr. Leon had graded it (granted, I wound up simply holding off, period. Eventually I’ll get back to it!).

So I suppose I’ll be asking Dr. Petrik a question on Monday (unless she is reading this before class and wants to comment :)): Should I leave the portfolio homepage as-was (i.e., separate the CSS for that page from that of the rest of the site), or is it okay to keep modifying the style as I modify the rest of my portfolio site?

Through this exercise, I’m learning just how great CSS is. I can modify the one file, and it’s reflected on all of the different pages of my site. Nice.

Meanwhile, as I moved through the font video, I also began to switch around the fonts in my CSS and think about the type assignment for next week. In searching for an appropriate font, I came upon one called “Texas Hero.” Curious, I checked out the backstory: the font designer’s mother was a volunteer at the University of Texas Center for American History (where I once conducted some research for what will likely be my final class project and eventually part of my dissertation). He designed fonts based on letters in CAH’s collections. As it turns out, he based the Texas Hero font on the handwriting of Thomas Jefferson Rusk–recipient of a letter I included in my final project last semester.

So, I had to have this font (yes, such things are the objects of this history nerd’s coveting). I downloaded it. Then I got to the part in the video about how not all fonts are licensed for web use. So I read the end-user license agreement. Just to be sure, I emailed the creator. He kindly emailed me right back (on a late Saturday afternoon, at that!) and clarified the agreement, which indeed does not allow me to use the font in the text of the site. This makes sense; if I uploaded the font to my server to use with the @font-face command, someone could easily download the font and not pay him for his hard work.

Therefore, although I may pay the extra fee for web use in the future, for now I will just use the font in my header graphic (which the creator said was fine, as the font is not actually uploaded to the server). Indeed, in the end the header will probably look much better than it does with the convoluted way I centered my name on top of the map. Don’t ask me how I did that, as I’m not sure I could tell you!

I should add, the site where I bought Texas Hero has some other great fonts for historians. Check it out.

Is live. You can see it at: http://davidmckenzie.info/portfolio (link updated 2-7-12). Here is the assignment.

It’s still very preliminary, so any suggestions are most appreciated. I’m sure it will change through the semester as I learn more about, you know, how to be a digital historian (versus what I’ve done so far, talking about being a digital historian).

As you can see, I’ve used the same map that I use in the header here. The background color in the header and footer comes from the WordPress theme Quintus, the same I used (in modified form) for this blog.

I created the page from a Dreamweaver template. The main difficulty was putting in the menu bar, but after many hours of trying, I got it to work (yes, I’m obsessive that way). Because I’m dealing mostly with 18th- and 19th-century material, I went for a more traditional look, albeit with some sans-serif fonts for accent. I had the same consideration when choosing my WordPress theme, and so used the similar look.

So, here it is thus far. Please feel free to comment!

The Importance of Type

As I began to read for this week’s assignment, a book I had ordered arrived from Amazon. It’s the third edition of John Trimble‘s Writing with Style. If you haven’t used this book, it’s a great one. I had the first version on my bookshelf from 12th-grade English, and when I went to look at it recently, began to wonder about it. A Google search turned up a third edition, and a strong recommendation. 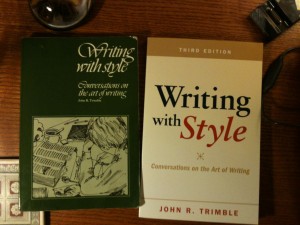 First and third editions of Writing with Style. Notice the differences. Where is your eye immediately dreawn?

When the book arrived, the first thing I noticed was, of course, the cover–particularly the difference between the covers of the first and third editions. The font difference, especially, was telling. As you can see, the first edition–published in 1975 (and showing a much younger Trimble on the back) uses a calligraphic font, while the third edition uses a serif for the book’s title, and a sans-serif for the subtitle, author, and edition. What particularly struck me, though, was the message that the typefaces sent. Whereas the first edition used the same font face, size, and color for the entire title, the third edition uses changes in color, style, and size to make its point. The word “with” is diminished. Meanwhile, the viewer’s eye is immediately drawn to the word “style.” Not only will this book teach you how to write. Most importantly, it will teach you how to write with style.

I use this example to illustrate the major point of this week’s readings: type, as a component of design (whose general importance was the subject of last week’s post), matters.

Like with design, we as historians must think more about the messages that our fonts convey. This is prevalent in the exhibition world already–would you feel a sense of dissonance from, for example, a Civil War exhibition that uses Helvetica? Just the same, for web work we also need to consider our font, and be willing to play with styles and sizes.

I personally loved the book Thinking with Type, as it helped me, well, think with type; I already noticed its impact on Friday, when I designed a flyer for an upcoming work event. The book presents typographic rules in easy-to-understand terms, and also, as Megan notes, gives some personality to the myriad (the word, not the font) fonts that appear on one’s computer.

Downed tree in front of offending GAO sign, February 2010. I'm guessing Ellen Lupton would have liked to see the tree take the sign down with it.

As a side note: I couldn’t help but laugh that Thinking with Type cites the sign of the Government Accountability Office, across the street from my office, as committing a “crime of type.” When doing research for the walking tours I lead around that neighborhood, I came across a building that once occupied the block where that criminal sign now sits: the Typographical Temple, home to the Columbia Typographical Union. Appropriate.

The Importance of Design for Historians

A Museum Studies classmate turned exhibition design firm colleague once remarked that she pursued design as a career because it combined her interest in art with an appreciation for engineering inherited from her engineer father. This is the best definition I’ve heard of design and its importance–it’s not just about making things pretty (the art side), but functional and usable through visual and physical cues (the engineering side).

That is the main point of this week’s readings (for the two of you following at home, scroll to January 30): design creates the form and function of everything, and sends its own cues. This is an important lesson for historians, particularly in a climate where our work will increasingly be on the Internet or in other media, and where we will be interacting frequently with designers, if not designing ourselves.

In history, we are used to privileging text, as can be seen sometimes when historians review museum exhibitions and focus solely on the text. This means they miss the messages sent by the space, which is planned just as meticulously to convey the exhibition’s messages and themes. For an example of this, see the back and forth between Alan Singer and Richard Rabinowitz over the New-York Historical Society’s Revolution! exhibition (an exhibition I loved, for what it’s worth)–Singer’s critique focuses almost exclusively on the exhibition’s text. While the text is an important component of the exhibition, it is merely a component. 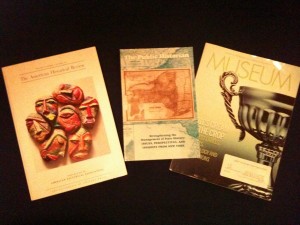 From left: American Historical Review, Public Historian, Museum. Each conveys the message of its organization.

No matter what, the design of something contains a message. Let’s look at the main publications of the three professional organizations with which I associate myself: the American Association of Museums (disclosure: my wife works there, but not on the publication), the National Council on Public History, and the American Historical Association. Each reflects its organization and its audience. AAM’s Museum is glossy, with numerous color photos and a magazine-style layout. The American Historical Review, by contrast, conveys heft both by its bulkiness and its design. The cover is plain, with one image and serif type on a white background. Public Historian falls in the middle: It contains photos on the cover and more color.

What messages do they convey? Museum serves a field where conveying messages visually in physical and digital spaces is paramount. Public Historian serves a field with similar concerns, albeit one where text is more privileged. American Historical Review, by contrast, serves a field whose traditional means of communication–at least those that advance one’s career–consist of monographs and article. In other words, text is privileged.

When we historians are communicating with others who privilege text, perhaps a design like that of the American Historical Review makes sense. It conveys extreme seriousness, perhaps even turning off others outside the profession (and, I suspect, many within). But as more of our work goes online, and as even those in academia (those few who get jobs on that path, at least) hopefully work with museums and historic sites, we need to have a greater understanding of design.

As B.J. Fogg’s report on website credibility notes, design is the first cue of credibility for many, not just on the Web. Even if we are not actually the people designing our own websites (or museum exhibitions), we need to be aware of the language of design for communicating with designers. The era where we could not be concerned with design is over, if it ever existed. We convey meaning through more than our words.