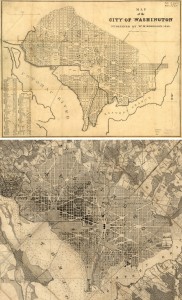 The two maps, together. I suppose another step would involve superimposing one on the other. Perhaps another time.

This afternoon, as I finished up Visual Explanations, and furthermore tonight, when I returned home from giving a talk and saw Megan’s insightful comment about ability to compare maps, I realized I had made a mistake of parallelism in my previous blog post. When I displayed the 1846 and Boschke maps of Washington, I didn’t display them next to each other, and more importantly, I didn’t display them consistently.

So to make them more comparable, I went back to our now old friend Photoshop. I didn’t, for now, bother with making them a consistent color or cleaning any damage (since it’s 12:31 a.m.–so if anyone sees me bleary-eyed in class, you know why!). But I did rotate the Boschke map, and crop it so that it was consistent with the 1846 map. Then, I put the two maps into one image, separated by a small white line. So, here is my work–I saved it at 800 pixels wide, so you can get more of a comparison by clicking on the image. Now it’s easier to see how the 1846 map just shows the city’s blocks, giving an illusion of a built-out city, while the Boschke map shows the city as it actually existed in the late 1850s–having grown significantly even since 1846.

Addendum 2: This week I commented on Claire’s and Richard’s posts.