This week’s reading and video assignments cover more about the magical world of Photoshop, particularly how it can be used to restore historic photos to their former glory.

As Dr. Petrik noted in our class discussion last week following the class’s lively blog exchange (read the awesome posts by Sheri, Geoff, Lindsey, Celeste, Megan, Beth, Stephanie, John, and Jeri, all responding to each other), images start changing the moment they are created. They deteriorate; they change. In order for us to get the utmost information out of them–and for our audiences to get the most information–we need to modify them. This week’s assignments show just how powerful of a tool Photoshop is for accomplishing such tasks.

Like Claire and Maggie, I have dabbled in Photoshop through the years for various tasks, mostly learning what I needed to in order to complete the task at hand. Like them, I’m happy to have some more formal training, as the sheer power and complexity of the program has long intimidated me. For example, I did the header image of my Clio 1 proof-of-concept project in InDesign rather than Photoshop. Although InDesign worked well for simple tasks, like fading the background map, I couldn’t do nearly the effects I could with Photoshop.

The more that I’ve read and watched the past two weeks, the more in awe I am of Photoshop; as Robin Williams (not the comedian!) and John Tollett note in The Non-Designers Photoshop Book, the thousands, even millions, of options this program presents are just amazing. I’m still a bit intimidated–I’m glad to have these books and videos as references–but am glad to know what can be done. If you are looking for a book on Photoshop, I’d recommend this one.

While last week’s Lynda.com video (“Photoshop CS5 for the Web”) was helpful, like others I watched it passively. With this week’s (“Photo Restoration with Photoshop”), by contrast, I’ve been dabbling in using the techniques on my own photos and images.

As Claire and Maggie said, if only I had known about some of the options when I had something I needed to accomplish. 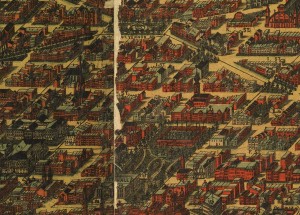 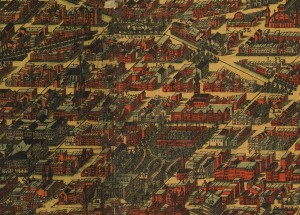 1884 Sachse map, partially repaired. It is still obvious where the rip was because of the differing tones from left to right. Next step...

I especially wished I had known how to repair rips and folds when I worked on a brochure about Jewish sites in downtown Washington in 2009. I found an 1884 birds-eye view of Washington. Thanks to the Library of Congress Geography and Map Division’s compression technology, I was able to download an extremely high-resolution version of this map. I then zoomed into and cropped the neighborhood that the brochure interprets, roughly today’s Judiciary Square, Penn Quarter, and Chinatown area. The problem? The original map had been folded, and thus partially dissolved, right where I needed. Being clueless about Photoshop, I didn’t think there was much I could do except move part of the map closer to the other, to at least close part of the gap. Nonetheless, the gap was still there.

While watching the video, I decided to try some of the techniques suggested, including the clone stamp, patch tool, and spot repair tool, on that map. I’m showing my result here. It’s far from perfect, and indeed I’m not sure I would use this in the brochure; it was too difficult, and possibly impossible, to fill in some of the gaps with precision because of the map’s extreme detail. Nonetheless, in a 3-inch-by-4-inch (or something along those lines) map in a brochure, that might still work. Perhaps for the next print run I’ll use it… 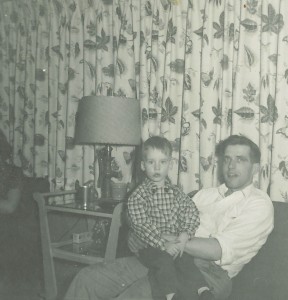 Faded picture of my grandfather and uncle, late 1950s. 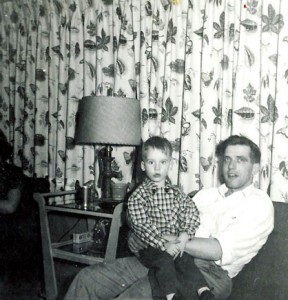 Not perfect, but getting there. Doesn't look like such an old picture.

Meanwhile, during a segment on restoring life to a faded black-and-white photo, I took a photo of my maternal grandfather and uncle. The Curves and Levels techniques that the video suggested worked; here I’m also showing before and after. It’s still not perfect, nor as good as the one the presenter showed. This image was more difficult because the left side was extremely dark; perhaps I will need to crop it.

While the restoration was far from perfect, I was able to see so much more detail. Thus, the ability to restore images is invaluable for us as historians. Images show a lot, but deteriorated images also hide a lot. If we want to use images more effectively, both in research and dissemination of our work product, it’s important that the images be up to par.

So as I spend my “spring break” (said using quotation marks since it’s still a normal work week!) working on the image assignment, I’m feeling less intimidated by Photoshop. Still a bit intimidated, but glad to be dabbling more in this powerful, and amazing, software.

Addendum #1: Geoff and Megan both have great posts about the staging of photographs and how discerning we need to be toward photographs as historical resources. Read them.

Addendum #2: This week I commented on blog posts by Richard, Megan, and Beth.